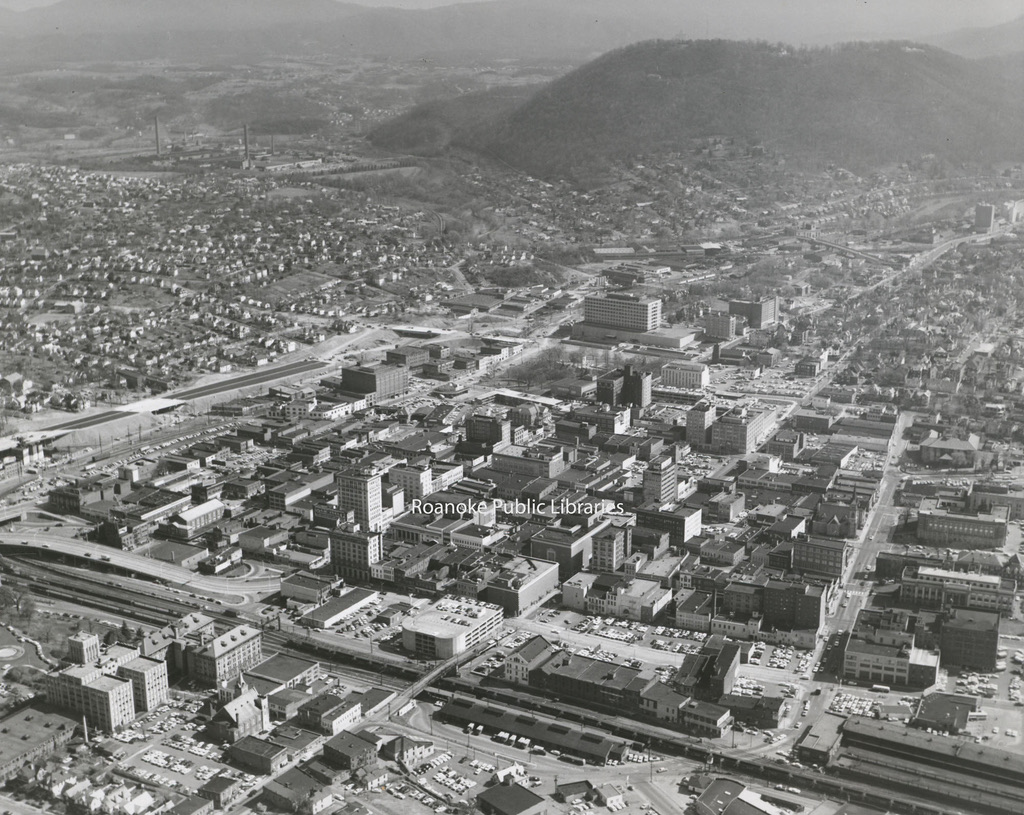 Introduction to Urban Renewal and I-581
Renewing Inequality notes that urban renewal began with the Housing Act of 1954. During this time, the US government set aside one-billion dollars in federal funds for cities to "improve" their housing and infrastructure. These efforts called in industrial and commercial changes to targeted areas, with economic boon becoming states' primary incentive. The renewal process entailed state-sanctioned home razing, business destruction, and even displacing cemeteries to clear the way for progress. The buildings that were typically at risk were the ones that were located in the African American neighborhoods. Because of the methods of urban renewal, people of color, especially African Americans, across the country lost their houses, business, and social spaces, displacing them from their homes.

Urban renewal arrived in Roanoke, Virginia, around 1955. Journalist Mary Bishop, who wrote numerous articles in the Roanoke Times about the urban renewal process's effects, often called the process "slum clearance." The "slums" in question were actually homes, businesses, schools, churches, and a cemetery located in the Gainsboro community. Gainsboro was home to a large population of African American residents. As evidenced, race is clearly part of the renewal process. The clearances of these places made room for "the Roanoke Civic Center, the main post office, white-owned industries, hotels, fast-food restaurants, and businesses" (Racial Remapping) and of course, I-581. In 1963, William House, then the executive director of Downtown Roanoke Inc., considered the interstate's construction "progress toward the goal of continuing prosperity for Roanoke's central business district (William A. House)." While I-581 brought big businesses and boosted the economy, it was detrimental to the livelihoods of local people of color.

Support and Opposition
The proponents of urban renewal and the interstate's development were most interested in the economic gain of big businesses and keeping up with industries across the nation. Some simply wanted better stores to shop at, while others hoped for more employment opportunities. Additionally, many felt that "other cities have gone ahead with housing development and urban renewal without injury to private enterprise". (Roanoke Times).

"Roanoke is being left behind. If we maintain breeding places for disease and crime, that is poor recompense for refusal to permit financing of improvement" -Roanoke Times Editorial, April 7, 1955.

Their desire for improvement influenced many Roanokers to overlook or simply ignore the devastating effects of this new project.

Opponents of urban renewal and the construction of I-581 mainly consisted of those in the Gainsboro area and/or those worried about the long-term effects on local small businesses. Gainsboro residents did not want to sell the houses that they had been born in or lose their tight-knit community. The relocation solution put consequential and persuasive weight on residents to sell and vacate their homes. One such resident, Charles Meadow, recalled "...a bunch of poor people over there struggling. They just move them out and scattered them around. That broke up the cooperation of fellow man (Racial Remapping)." Fear of loosing their community drove many to protest the construction. Sadly, the renewal opposition's predictions were proven correct.

Effects
As residents left their homes, many witnessed burning and carnage that took place when they left. Martha Park, a witness to this destruction, noted that "in the first two years of urban renewal, neighbors watched as firefighters burned over 100 homes. The rolling hills of Northeast were bulldozed flat (Even the Dead Could not Stay)." Displaced Roanokers found themselves scattered and separated from their community. One affected institution, the Melrose Baptist Church decided to relocate. Minister McHenry explained that "changing population patterns have taken most of the members out the present church area (Roanoke Times)." Even if they were not asked to move, organizations and businesses had to leave in order to survive. The community would never forget displacement and the careless handling of their former homes.

The long-term effects of urban renewal and I-581 created a significant impression on the lives of African American Roanokers. The process forced businesses to move, businesses which at the same time could not compete with the larger companies that started to trickle inwards. Displacement alongside an unequal, often discriminatory housing market also forced some people to take out large loans to move to a house that was a short distance from their previous residence or pay rent on an overpriced apartment. Minnie Cox, a renter of local white minister and landlord, John Kepley, enumerated the many dangers and damages her house presented to Mary Bishop. To illustrate, Bishop explained that "for the $375 she paid each month, Cox expected repairs", to which Cox remarked "He'll promise you, and never come (Roanoke Times)." Landlords like Kepley took advantage of renters who had no choice but to stay in his homes. The promises of better homes proved empty for many residents.

These long term effects of urban renewal and the construction of I-581 are far from forgotten. In 2018, Martha Park, who witnessed the process of urban renewal, created an illustrated strip that described the progression and how it affected her community (see below): 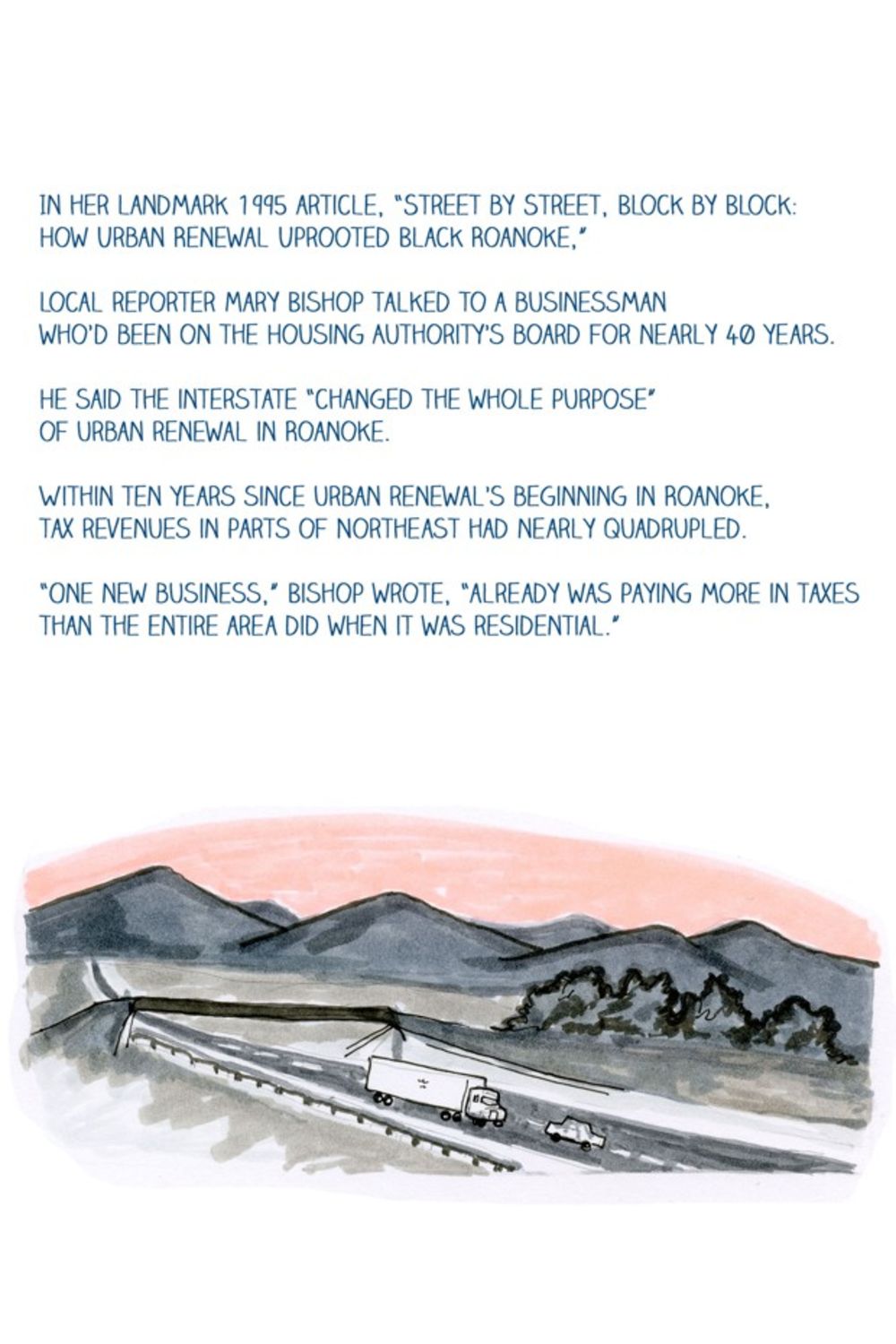 (Even the Dead Could not Stay)

Roanoke Voices
The memory of urban renewal and the development of I-581 lives on in Roanoker memories. Please explore our collections to hear stories from Roanoke citizens and find images of the process. Below you will find links to interviews and oral histories of citizens who experienced urban renewal first hand. Please take a listen and reflect on their stories. As we can see, urban renewal is far from being just history. Roanoke still feels the aftershocks of development. As such, we invite locals to contact us with their own stories and sources so that we can more accurately tell the on-going story of urban renewal and I-581 in Roanoke.
Next, we'll explore some of the local connections I-581 brought to Roanoke.