Construction of I-581 began in 1964 with the goal of connecting Orange Avenue in Roanoke and Route 460 more directly with I-81. This spur continued to extend and grow over the next few decades, connecting to downtown Roanoke and most notably with the Roanoke-Blacksburg Regional Airport. Some claimed that places such as the New Valley Mall and business district flourished mainly due to the interstate's incoming traffic connecting to the local economy.

Another connection to I-581 is the Southwest Expressway, later renamed the Roy Webber Expressway, which opened in 1980. This rename came in honor of the late Roanoke mayor, Roy Webber. I-581, overlapping U.S. 220, officially ends at Elm Avenue interchange, due the expressway's failure to meet interstate building standards. To address this limitation, the Webber Expressway, beginning at the interchange, gives drivers a direct route through Roanoke while also connecting the highway to VA 419. This expressway is also placed in between the Tanglewood and Towers Malls.

A portrait shot of Roy Webber can be found at the following link. 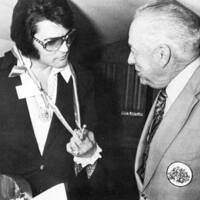 As previously stated, the aforementioned expressway is named after the late Roanoke Mayor, Roy Webber. Webber was previously a florist before becoming the mayor of Roanoke from 1949-1954 and again from 1968-1975. While Webber sadly passed away in 1975 from a heart attack, he left a lasting memory on the city of Roanoke. His successor, Noel Taylor, wanted to rename the expressway to honor Webber's public service as a two-term mayor, school board member, and his over 25 year service as a city councilman. Some initial opposition to this proposal emerged due to federal regulations prohibiting all of I-581 from being renamed. However, the city council agreed to rename a portion south of Elm Avenue, since that portion is technically not part of the Interstate Highway System. By 1978, both the city council as well as the State Highway and Transportation Commission agreed to rename the southward section of Elm Avenue after Webber. They then formally opened the expressway in 1980. The expressway, being a direct route and cutting in between the Towers and Tanglewood Mall, led to a decrease in Franklin Road's traffic. Local stores' business began to slow down while other companies, such as the Cycle Systems Inc. debated whether or not to move as some considered their presence an eyesore next to the new expressway. For others, business went along as usual, with no real dramatic shift in sales following the expressway's construction and opening.

Outside Newspapers and Counties

During I-581's initial construction from 1964 to 1965, non-local newspapers mainly reported on the Virginia State Highway Department's bidding on various interstate highway projects. Such newspapers included The News Leader located in Staunton, VA, The Progress-Index in Petersburg, VA, The Times Dispatch in Richmond, VA , The Bee and The Danville Register, both located in Danville, VA, and The Washington Post and Times Herald, a paper which ran from 1959 to 1973.

Coverage abounded as the state was opening up more miles of land so highways such as I-581, I-81, I-95, and I-264 could be built or expanded. Articles revealed to readers that contracts were awarded and the aforementioned projects were able to continue without much trouble. However, these non-local newspapers did not go into extensive detail about the construction of I-581 nor how it actually affected the city of Roanoke and its residents.

To learn about some of the conflict in I-581's formation, please click here.

If you'd like to learn more about Noel Taylor and other individual voices and stories affected by interstate 581, please continue to our Voices and their Stories section.